Two weeks in Freiburg felt like a lifetime—but now, looking back on it, it seems like only the blink of an eye. I met so many wonderful people and experienced so many new things; it’s hard to keep track of it all. I’m so grateful to have had this opportunity. Having never left the United States, I was nervous to make the trip. But after the stress and exhaustion of traveling, I woke up in a vibrant new place. A city surrounded by hills and forest—cobblestone roads, ancient architecture. (Not to mention Schwarzwald, the most beautifully green landscape my eyes ever did see.) And once the seminars began I knew I’d made the right choice. I met friends I will keep for the rest of my life, learned so much about writing as a craft, and even so much more about myself. If you are looking for a life-changing, exciting program this summer, Black Forest Writing Seminars is definitely for you. 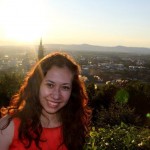 The program struck a great balance between letting us explore the town on our own and “scheduled fun.”  The trips to the Black Forest, places in town and our classes didn’t overload us with a pressure to get up and put our tourist hats on, which was fantastic. Freiburg was a dream to visit and it was wonderful to learn writing in a different country.  Even though I was there for only a few weeks, I miss it tremendously. Also, I felt safe the entire time, which isn’t always the case with studying abroad. I loved where we lived. None of us knew we’d be staying in dorms with other German university students and it was so cool to meet them. I think my writing turned upside down while I was there and I wouldn’t have it any other way. The best parts for me were the classes, the food, meeting new people and the opportunity to stay for two more weeks for free in the dorms, so I could do even more exploring after classes ended! Most inspiring summer of my young life.

Today's the day. You packed your bags last night, with all your best and tightest outfits balled up in the tiniest rollercase-backpack the Dollar General had to offer. The books are loaded in the backpack, the quart-sized bag filled to the brim with gels and liquids you didn't know how to use until a couple years ago, when the puberty effect kicked in and you finally started caring what you looked like. You've turned your ball cap backwards like Ash Ketchum and you're ready to conquer the world. And then you trip out of an airport in Basel, almost sixteen hours later, having to hail the right bus out of four and suddenly everything already seems too large, too much, too good to be true. You fumble some French to the bus driver and he responds in English because you're an idiot tourist, but you keep laying out the French in response, hoping the only foreign tongue you know will slip into your mouth like a balm, seep into your bones like oil so you can slip right through this all, no more noticeable than a passing, charmingly mocking shadow. A nap and forty minutes later, Freiburg is in front of you, a woman is greeting you, and the shock—a city! a city! So that's what it is—is enough to bleed you dry, send your normally stratospherically high voice skyrocketing, turn even the straightest lamppost wobbly. And that's just day one.

I adapted to Freiburg rather well, I hope. In the days to come—in the company of the other BFWSers, both students and faculty alike, as well as the confines of the brick-bound Freiburg—I nestled myself in like a mother cuckoo. A boy from the country of Amishland, Pennsylvania never knew so much...stimuli, I suppose, would be the scientific word. But somehow, by taking an hour to read Tim O'Brien on the grass of the University, or cradle the flowers by the vineyards in the heart of the city, I found some sort of kinship with home, some earthly bond more resonant to the inner part of me than anything I'd ever found in the churches I'd come into seeking penance, or advice. Maybe you can find that anywhere—nature is, of course, anywhere you will her to be, I would suppose. But in Freiburg, specifically, she seems ingrained. The city bustles around her, adapts to her. It is not the other way around. It could not have worked any other way.

It may seem hokey or corny to say that my experience with BFWS was so astounding largely because of the city of Freiburg itself, but I'm going to say it anyway. It was. As labyrinthine as it may have been to me, it was an adventure—if I got lost, I always found my way back to a tram line or a familiar intersection. It felt, to me, as if the city itself was willing me to some grand conclusion, some huge insight. On my birthday, which I celebrated in Freiburg with my new friends—none of whom I'd really met or talked to much before—it came, rather serendipitously: a boy I had liked hadn't even wished me a "Happy Birthday" on Facebook.

Yes, that was it. There's the big revelation. Vanity, maybe; heartbreak, if you exaggerate, because for the love of Merlin that boy was so incredibly asexual or at least straight; silly, almost indubitably. But more importantly came a thought of the sunlight peppering down on the stalls in the farmer's market in the middle of the city, hawkers demonstrating their wares in what seemed a hundred different tongues, and me, stuffed in the middle, breathing and calm and smiling.

Perhaps it is the same for all who go abroad—to conquer it, I suppose, gives you a measure of confidence, a sense you can achieve anything since you made it there and back. But I think that in Freiburg, as you tap into yourself through writing and reading and even more writing, you open yourself to what being "abroad" can really show you. You peel off your skin and expose the joints and sinew to the sun, let them dry and harden; and, if you're willing to turn with the Earth's spin, you find the places that connect in you stronger, heartened, bolder. If writing is the scouring of oneself, there is, for me, no place other than Freiburg that has let me scrape myself clean of the chaff. Alongside your compatriots in writing, alongside the ancient city whose walls welcome and enclose you from whatever place you come from, even if you're not expecting it, you will find what you're looking for if you let yourself wait, and soak, and be.

About midway through the second week we all left as a group for the Black Forest, where our classes would be conducted outside in the open fields and fresh mountain scenery.   The weather was amazing; T-shirts and shorts were the standard clothing.   We were given a few guiding themes in the conference room, then let loose to explore the Black Forest.  After dinner we would go out as a group to walk the many trails or come together and talk around the campfire as the day ended.   At night, under a full moon, students recited poetry; others performed scenes from their favorite plays.  But most of us stayed up late into the night, warmed by a roaring fire and crackling conversation.

On our last day we gathered and had a little party, and read the works we thought to be our best.   I read my short story “A Plan Without a Hitch,” after submitting it to nearly a week of heavy revision.  I spent the next two weeks revising other works I’d created in the seminars and submitted a 10-page collection of short fiction loosely joining elements of separation, longing, reminiscence, irrationality, and control, with a bit of humor.  My professors were helpful and wonderful.   I hope to have the pleasure of attending the seminars next year, if at all possible.